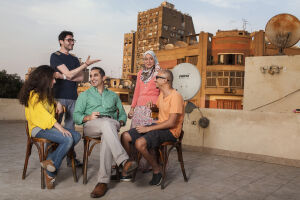 Bassem Youssef sits with some of his researchers and writers on top of their temporary offices while their new offices are being renovated.

Bassem Youssef is an Egyptian television comedian with his own show. The first season his politically tilted show was on OnTV and the upcoming season it will be on CBC. Dr. Bassem Youssef is an Egyptian doctor, satirist and the host of the satirical Egyptian news program Al Bernameg (The Program). The press has compared Youssef with American comedian Jon Stewart, whose satire program The Daily Show inspired Youssef to begin his career.